Congratulations to Kamela Harris and the People of the United States for Breaking a Quarter of a Millennial Gender Barrier and Electing to Vice President a Minority Woman! 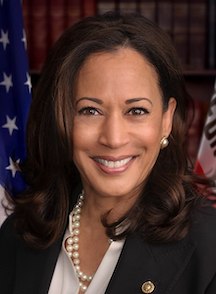 So… this is almost like the Brits obsession with the Royals – with the lovely Jill Biden as FLOTUS, we can all obsess a little – what will the Princesses wear today!?  From a style perspective, how fun to have two women center stage in the White House!  photo source

Well, my first observation I think is funny, is how similar Kamela and Jill look and dress.  They are both:

They differ in that Jill wears more pattern, as well as florals.  In my research for this article I’ve seen Jill in some lovely garden-party type florals, higher heels, and some shoulder-baring evening wear that I love, and I doubt we’d see Kamela in the same.

If there was a word for both I think it would be polished and confident.   Kamela of course has just accepted a job held by a man since the position was invented, and her attire leans toward some of those masculine, traditional attributes; solid, tending toward dark blue, and almost exclusively in pants suits; which in the past were not at the highest level of executive presence – but times are a-changin’!

Kamela’s pussy bow (grab this, Mr ex-president) blouse is a nod toward Margaret Thatcher in the 80’s and traditional male neckwear of Parliament, as well as the bowed blouses of suffragette women at the turn of the last century.

In fact, “White has historically been the favored hue of suffragettes” as well as worn by past political women at pivotal moments making a statement of power and equality (per US Magazine.)“Harris’s white trouser suit wasn’t a fashion statement, but it was a statement.” Vogue

Kamela is the more conservatively dressed of the two women – and if I had to guess, it’s not a personality choice, but because “she had to”.  To be beyond reproach with never a style mis-step may be a tenant she has given to her style advisors.  Her use of pearls to elegantly feminize her more masculine dark pants suits is perfect.

Her Converse sneakers are the equivalent to George Bush’s cowboy boots and her casual jeans reminiscent of Obama’s rolled up let’s get down to business shirt sleeves.

So traditional and classic in attire, Kamela has been no stranger to breaking barriers, so it should be very exciting to see if and how she redefines the look of a woman leading our country.   “Expect subtly smart, comfortable clothes that semaphore a woman getting stuff done,” says Kate Finnigan of Vogue.

Ann Lindsay is Style of Success and Suited for Love

I work to make you look effortlessly confident.

I bring confidence, organization, efficiency to your life.